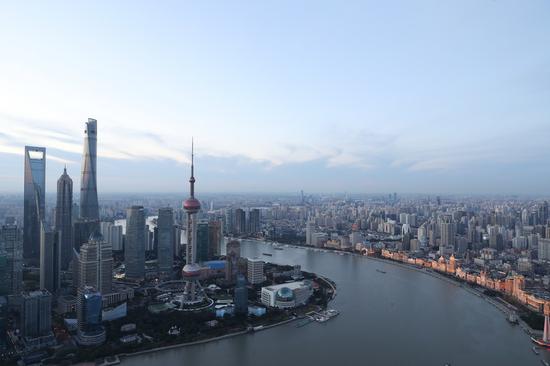 Photo taken on Nov. 1, 2018 from the Baiyulan Plaza shows view of the city of Shanghai, east China. (Xinhua/Fang Zhe)

Shanghai is expected to play an increasingly important role as a financial center thanks to China's commitment to and efforts in the continuous reform and opening up, experts have said.

According to the yearly Global Financial Centers Index reports by Z/Yen, a commercial think-tank in London, Shanghai has become the fourth most competitive financial center in the world following New York, London and Tokyo in early 2020. It ranked the 24th in 2013.

Shanghai has a lot of potential to be a major international financial center for similar reasons why New York is, said Richard Sylla, chairman of the Museum of American Finance in a recent interview with Xinhua.

The economic foundation there for a financial center is very large, said Sylla, who is also professor emeritus of economics at the Leonard N. Stern School of Business of New York University.

"China's economy is very big. So Shanghai will become a major financial center. It just seems like Shanghai is bound to become a financial center," said Sylla, who specializes in the history of financial institutions and markets.

Shanghai should have a parallel role with New York and London in terms of global trading of financial products, asset allocation, investment banking, insurance and other business, Chen told Xinhua recently.

"I think this is beyond doubt," he said.

Shanghai will continue to be a very important fund-raising center to support the growth of Chinese companies and it is also pivotal to the institutionalization and globalization of China's capital market, said Eugene Qian, chairman of UBS Securities Co., Ltd. on Friday.

"We continue to see international financial institutions, such as asset managers, banks and insurance companies, invest in China, and a large number of those are headquartered in Shanghai. Undoubtedly, Shanghai is an important gateway to China for global investors," Qian told Xinhua.

"I assume that it would play a larger and larger role because of the Chinese economy's importance to the Pacific region and the world economy," said Sylla.

Shanghai has made very fast progress in building itself into a financial center and the successful launch of crude oil futures by Shanghai International Energy Exchange serves as a landmark, said Chen.

The last ten years can be seen as the golden decade of reform and opening up for China's financial market, in which Shanghai has played a key role, said Qian.

China's further liberalization of the financial market is attracting big-name international financial firms from both Europe and the United States, with Shanghai as a magnet.

Now, the Wall Street firms are looking for long term opportunities and that is why they are very heavily invested in China, said Chen.

Qian sees the launch of Shanghai Stock Exchange (SSE) STAR Market (Science and Technology Innovation Board), which adopts the IPO registration system, as a good example of institutionalization and globalization of China's capital market.

The expansion of Wall Street firms in China results from China's early recovery from the COVID-19 pandemic, growth potential of bond and stocks market, and its opening up policies, according to Qian.

"Coupled with the opening up policies in recent years, the trend for foreign financial companies coming to China is expected to continue," said Qian.

UBS AG, which is bullish about Chinese market potential on asset management and securities in the coming years, acquired two minority stakes of joint venture UBS Securities Co., Ltd. at the end of 2018 and raised its shareholding to 51 percent in the company.

The American and Chinese businessmen get along pretty well and bilateral cooperation is mutually beneficial, according to Sylla.

As further reforms progress, Shanghai's A-share market including the SSE STAR Market will become a popular listing venue for the secondary listing of China's American depositary receipts (ADRs), according to Qian.

China market to open further to most competitive US companie